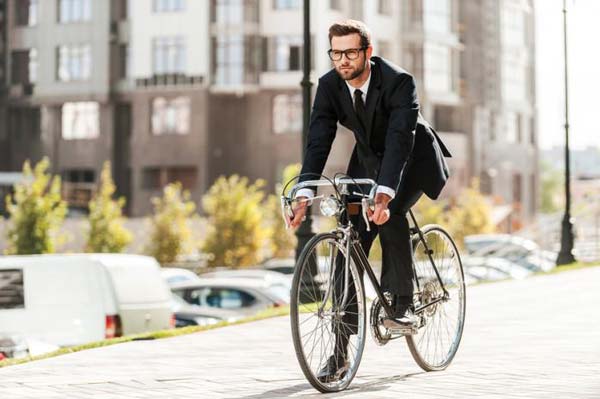 Switching from driving to cycling to work may lower the risk of heart disease.
Active commuting – by means of walking or cycling to and from work and for other purposes, such as grocery shopping and transporting children – is a form of exercise that can be a part of everyday life.

For many, walking and cycling not only contribute to daily health-enhancing physical activity levels, but also provide cost- and time-effective alternatives to commuting by car or public transport – while reducing traffic congestion and air and noise pollution.

Though active commuting has been previously linked to a lower risk of heart disease and premature death, few studies have specifically assessed the cardiovascular health benefits of commuting by bike – or investigated the impact of changing modes of commuting to work, from car and public transport to active commuting.

The aim of the Circulation study was to examine the association between cycling, changes in cycling habits, and risk of coronary heart disease in Danish men and women.

Findings showed that the 45,000 Danish adults aged 50-65 years who regularly cycled to work or for leisure had between 11-18 percent fewer heart attacks over the course of a 20-year follow-up.

The analysis indicated that some protection against heart disease was achieved with as little as 30 minutes of biking per week. Participants who changed their behavior and took up cycling in the first 5 years of follow-up had a 25 percent reduced risk of developing heart disease, compared with men and women who remained non-cyclists in the subsequent 15-year period.

While the findings are promising, the researchers say they do not prove that cycling for commuting or leisure prevents heart attacks. The results do highlight, however, that the participants who cycled on a regular basis had fewer cardiovascular events and is, therefore, a strong indicator that cycling is beneficial for cardiovascular health.

Regular cycling could have prevented over 7 percent of heart attacks
“Finding time for exercise can be challenging for many people, so clinicians working in the field of cardiovascular risk prevention should consider promoting cycling as a mode of transportation,” advises Anders Grøntved, M.Sc., M.P.H., Ph.D., senior study author and associate professor of Physical Activity Epidemiology at the University of Southern Denmark.

Participants were questioned about their cycling habits at the start of the study and then again 5 years later. Additionally, Grøntved and colleagues recorded the exercise habits, physical activity levels, and frequency of bicycle riding of all participants as well as heart disease risk factors, such as blood pressure, weight, cholesterol, smoking, diet, and alcohol consumption.

Overall in the 20-year follow-up, there were 2,892 heart attacks, of which, cycling on a regular basis could have avoided more than 7 percent, the team says.

“Because recreational and commuter biking is an easy way to make physical activity part of one’s routine in a non-structured and informal fashion; based on the results, public health authorities, governments, and employers ought to consider initiatives that promote bicycle riding as a way to support large-scale cardiovascular disease prevention efforts,” says Kim Blond, M.Sc., lead author and research assistant at the University of Southern Denmark.

In the Journal of the American Heart Association study, similarly, researchers examined the potential relationships of cycling to work at the start of the research with a change in commuter cycling, with 10-year incidence of obesity, hypertension, hypertriglyceridemia, and impaired glucose tolerance in men and women from Northern Sweden.

The team also assessed whether genetic and other factors modified the relationships, and they examined the percentage of these risk factors for cardiovascular disease that could be prevented if all participants continued to cycle or switched to commuting by bicycle to work, during a 10-year follow-up period.

Switching from passive to active commuting reduced all risk factors
Over a decade, more than 20,000 individuals in their 40s, 50s, and 60s had their commuting habits, weight, cholesterol levels, blood glucose, and blood pressure assessed.

The researchers revealed that after 10 years, the individuals who switched from passive to active commuting were also less likely to be obese, have hypertension, have elevated cholesterol levels, or develop diabetes, when compared with the inactive commuters.

This story was originally published here